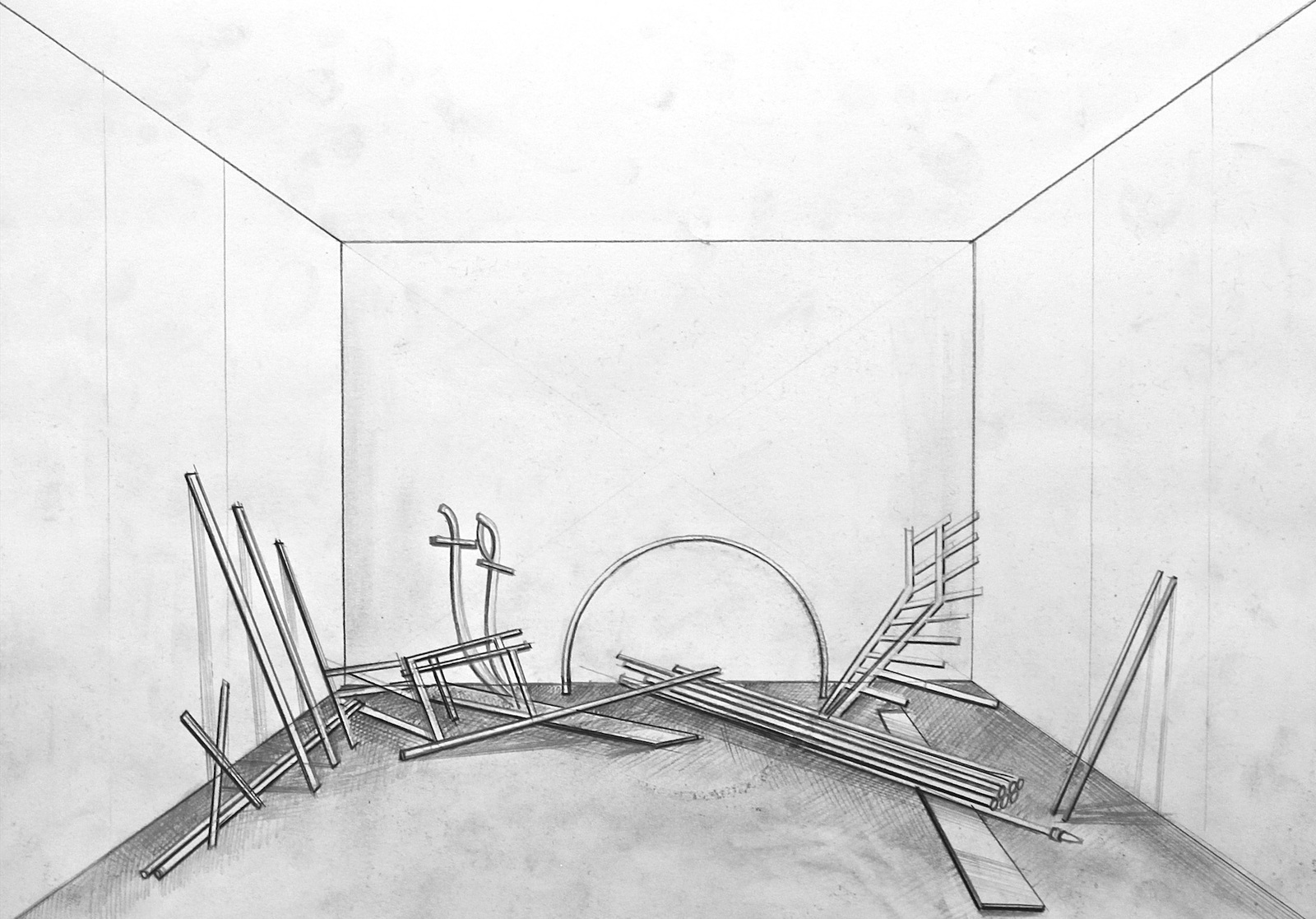 The „Support Points“ project considers the topic of a long term maintenance of ideas, visions and their translation into a visual language of shapes (forms) and signs, it also asks how to know when certain philosophic direction is still vital, up-to-date and beneficial, and when it is just a repetitious effort to keep it alive.

And when, on the contrary, an already confirmed value can be used with new energy and contemporary drive. During his residential stay as part of the Metropoli Project in Upper Silesia Jan Pfeiffer investigated several sources, dealing with the topic of adopting the meanings of symbols, exploring the moment we “grab” a symbol and make it our own. His other topic has been idea maintenance in a sports organization where he was interested in the creation of its own mythology and aesthetics, costumes and flags.

In the room you will find a pile of different iron profiles and pipe compositions, some of which have been shaped to resemble historical symbols such as arches, wings, spears and others. On the one hand, the iron tangle will remind the viewer of discarded and used materials, on the other, however, thanks to its shiny surface, the installation will give the impression of being prepared for a new use. In this spatial installation there will also be space for two drawings: a pencil drawing on the central wall will depict a door inspired by Egyptian mythology, while an animation created from hand drawings in pencil, depicting a man in a "Falcon" costume practising choreography, will be incorporated into a cluster of iron elements.

The project will also show footage in three acts. In the first act, a young man approaches the already familiar Egyptian gate in a burnt-out factory, fights in front of it or performs some kind of ritual, throwing pieces of Styrofoam at it, as if he wanted to pass through it or change the current state of affairs in some way. In the second act, a hussar appears against the landscape. Riding his horse, he looks around, lowers his lance and begins to attack. At first we have the impression that this character has been torn out of the developing story. The mechanisms that create the illusion of his ride are immediately revealed, revealing the construction of the character. The third and final act extends a helping hand to the audience. A woman standing on an open theatre stage recites a monologue on the general theme of the project and sums it up with a dramatic message, delivered as if from the point of view of an immortal being.

Jan Pfeiffer - born 1984. Lives and works in Prague. Studied at the Academy of Fine Arts in Prague (2006–2011), Prague College School of Art & Design (2002–2005) and the Cooper Union in New York (2011). He is represented by Drdova Gallery. He has taken part in numerous exhibitions in the Czech Republic and abroad. Prizes include the Essl Art Award CEE (2009), and the 8Henkel Award (2011). Pfeifer employs photography, video, drawing and animation as documentary tools, which he subsequently transforms in the concepts of his exhibitions and forms of presentation. He tends to target the topos of the location and its perception. The majority of Pfeiffer’s works are based on an analysis of everyday situations and how we experience them; they frequently refer to a specific location, to movement and its trajectory and to a search for one’s own place in the structures of reality.

The project is partnered by Visegrad Fund.

The project is part of Project Metropolis, organised jointly by the Imago Mundi Foundation, CSW Kronika in Bytom and the Silesian Museum in Katowice.

back to: Exhibitions / 2014
Michał Korchowiec. Four Seasons of the Year, No Spring Though
Plica Polonica
see also: Jan Pfeiffer. Support Points in the Archive