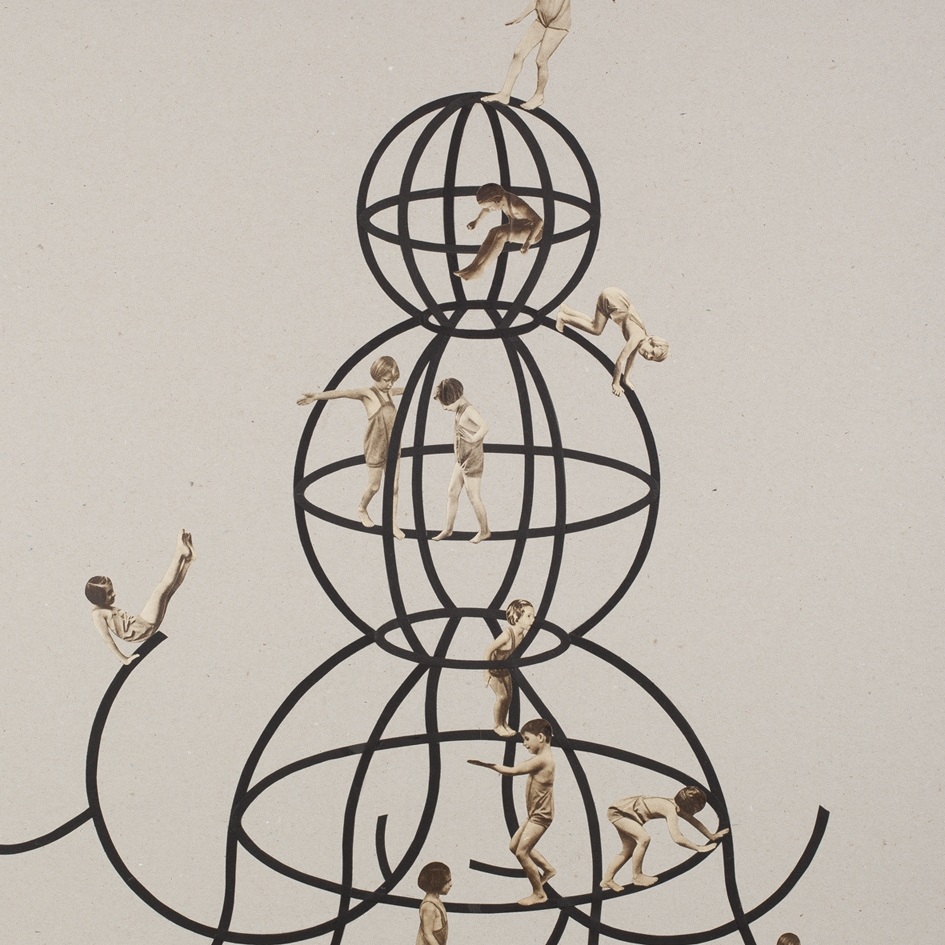 The title of the exhibition, Body in Form, outlines the main themes of Patrycja Orzechowska's art: corporality, issues of the mutual order of people and phenomena, the vitality of things. The show at the Kronika presents works from the artist's last few years: collages, staged photographs and installations.

In her collage series Kinderturnen, Orzechowska uses photographs from the German textbook Children Gymnastics. A Collection of Exercises in Photographs, Illustrating the Use of Gymnastic Instruments and Accessories in Kindergarten (original title: Kinderturnen) from 1959. The photographs of children (the models in the book were residents of an orphanage) are inscribed by the artist into geometric structures that create an abstract creation or form the words Haus or Home, indicating a seemingly safe and orderly space. As in Robert Schumann's Kinderszenen (Children's Scenes), references to childhood are connected with a sentimental journey to the past, but also with the oppressiveness of memories.

In her works, Patrycja Orzechowska also refers to performing arts, working with gymnasts, dancers and actors. In the Homebody series of photographs, the model is a young girl performing yoga asana figures, juxtaposed with everyday objects (chairs) and the space of a house.

Body in Form points to the objectification of the body (our self) in devices, both material and ideological. Many political systems, religions, but also modernist artistic directions used/used an apparently anthropocentric way of visual thinking (Pythagorean mental cliché), inscribing the human figure into apriori accepted forms of wholeness, symbolised e.g. by geometric figures, crosses, stars or other symbolic structures, serving as tools of control and taming sexuality. At the same time, the artist has dealt with the topic of body exercises and training which are one of the symptoms of today's terror of fitness and suppression of the fear of death.

At the same time, Patrycja Orzechowska aims to restore / sustain the vitality of objects that have lost their function. As in the case of the found German book (archeology of photography), in her installations at the exhibition (Skeletons, Wall), she uses old lampshades or used fireworks, with the full consequence of the meanings they carry: repeated light, flash, explosion, illumination... Last but not least, the installation Skeletons, arranged in the former living quarters of a Bytomian institution (once the home of the Kohn Jewish family) is also part of a series of Kronika activities on the identity of the place.

Parallel to the exhibition in Kronika, from 9 May to 29 June, the Silesian Museum in Katowice will show a joint work by Patrycja Orzechowska and Rafał Urbacki Miłość i Medycyna (Love and Medicine). An Anthology, created as part of the Project Metropolis programme, organised by Kronika and the Imago Mundi Foundation.


Patrycja Orzechowska (b. 1974) - visual artist using, among others, the medium of photography, collage, graphics, film, installation. She graduated from the Academy of Fine Arts in Gdańsk. Patrycja Orzechowska's works have been presented at many individual and group exhibitions in Poland and abroad. She lives and works in Gdańsk.
www.patrycjaorzechowska.com