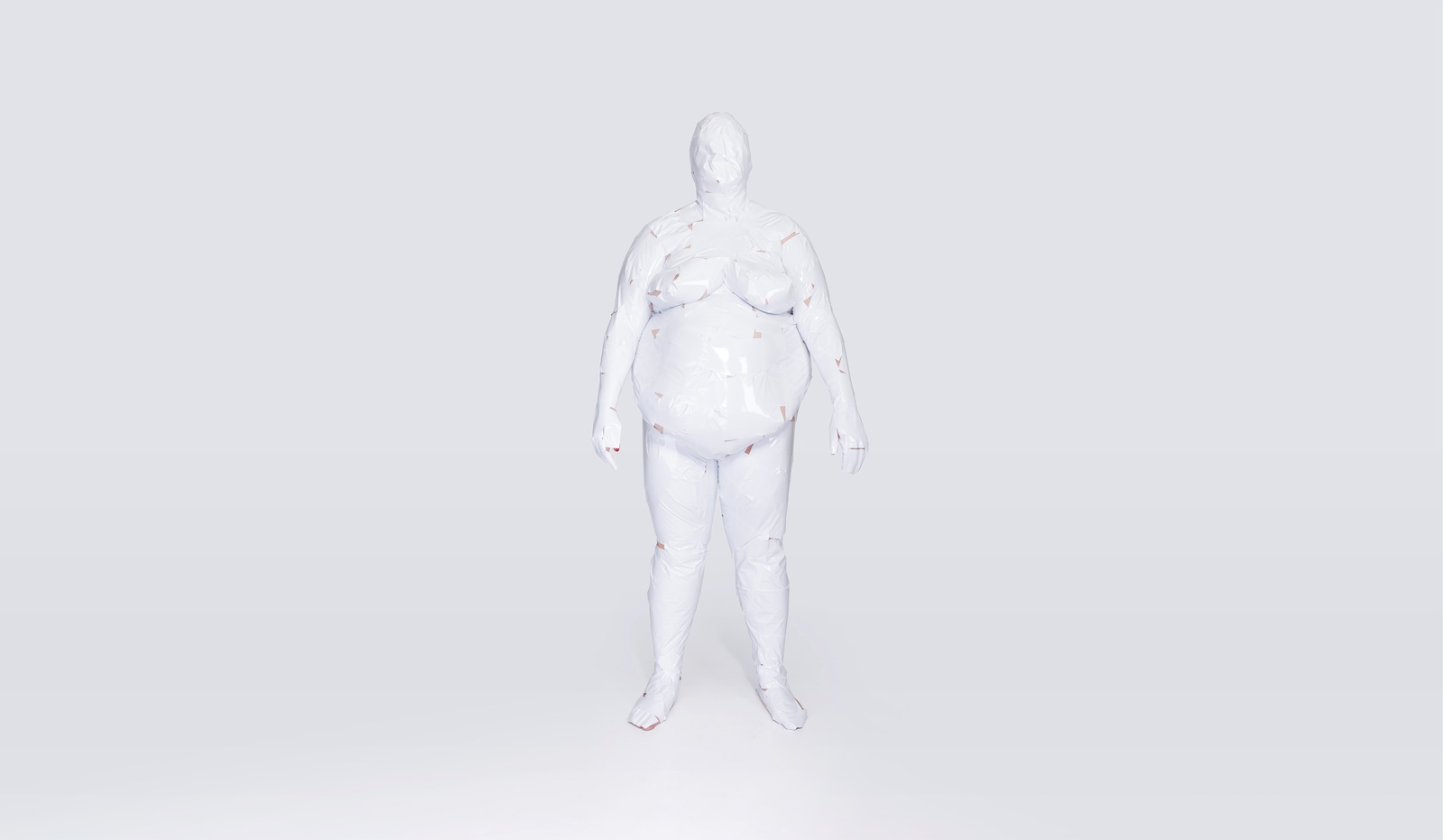 When a body is immersed in a fluid, it experiences an apparent loss in weight that is equal to the weight of the fluid displaced by the body. Diving in a swimming pool, Marta does not weigh almost anything at all: her light body moves freely in the water.

It is the only situation where she can release herself for a moment from the confines of the dominant cultural narrative, in which any deviation from the norm, every extra kilogram, is perceived as something scandalous – which compels her to make incessant corrections, erase the defects, get rid of excessive weight and adjust to the prevailing models. In the postmodern world, as Zygmunt Bauman remarks, “The pursuit of fitness is the state of perpetual self-scrutiny, self-reproach and self-deprecation, and so also of continuous anxiety.” When out of water, Marta weighs 172 kg and the surface of her skin is 326 cm². Suffering from super obesity, her body begins a rigid process of losing weight combined with a surgical procedure of gastrectomy.

The process is observed and recorded by the visual artist Natalia Wiśniewska. Interestingly enough, the idea to transfer it into the field of art originated from the eponymous Giantess – it was her who approached the artist to offer her the possibility to record the changes that were about to occur both in her body and in her psyche.
Their monthly meetings involve documentation and meticulous record of the achieved progress, but they also have a side effect to them: a bond that develops between the two women. As Wiśniewska says: “That peculiar offer originated from the need to confront the greatest enemy, which is one’s own body. The fact that Marta approached me, the use of art not only as a medium through which to talk about one’s body/problem, but also as a tool of rehabilitation of one’s social status, is for me both the starting point and the ultimate sense of the project.” The artist sees her long-term project with Marta as a field of research delineated by the notions of weight – not only physical, but also understood with regard to difficulties in day-to-day functioning, balance – also in social terms, comfort zone, exclusion, but also the role of the artist in the face of a real problem and supporting changes related to the socialisation of excluded individuals.

Owing to the participation in the project and a bold presentation in the gallery space, Marta regains visibility. Her straightforward, sometimes even naturalistic, depictions mark an attempt to tame what we repress because it leaves us uncomfortable. It suddenly turns out that also an atypical body can become an object of representation. Yet, what also emerges is the theme of adjustment. Why cannot Marta just say: be like me or don’t give a damn about it, but she fights with her own body? Because this is the essence of social control, regulation of behaviour, also with regard to the body. The human being behaves in a conformist way also due to social instinct, which strives to satisfy the need of group belonging. And every deviation from specific norms causes discomfort, which is in turn interpreted as a symptom of weakness.
We are currently seeing a tendency to perceive the body as a malleable material shaped with willpower: your will is all you need to change it. You are overweight? – lose weight! We cannot choose our race or sex, but according to the Western culture, we can modify our size. This approach is closely intertwined with neoliberal ideology, according to which it is the individual who bears responsibility for their own physical state. And excessive body weight is treated as a deadly threat. Obesity is discussed nowadays exclusively in a catastrophic spirit: accordingly, we are witnessing and epidemic, a rapidly spreading plague of the 21st century, a dangerous civilizational disease, etc. Obese individuals are perceived as apathetic, powerless, lazy and they are denied social respect. According to statistical data, they have more difficulty finding a job or renting a flat, they earn less, their social life is poorer. The borders of social acceptance of obesity are shrinking. Forced to make a change by a range of factors, Marta accepts the challenge. Yet, the process turns out to be arduous and painful – unlike its media image known from advertisements of specialised clinics or slimming medication. The difficulties are depicted, among other means, by a measurement table presented in the exhibition, which is supposed to indicate progress in losing weight, progress that stalls at a certain point. How much sacrifice is needed to achieve the desired goal – normality? Will the surgery need to be repeated? When can the process be deemed concluded and the goal achieved? What will the happen with the Giantess?

Natalia Wiśniewska – born in 1985 in Lublin. Studied at the University of Fine Arts in Poznań, where she received a diploma in graphic arts in 2010. Co-founder and curator of the Miłość gallery in Toruń. PhD candidate in fine arts at the Nicolaus Copernicus University in Toruń. She creates installations, objects, site-specific projects. Works in a contextual manner, combining the simplicity of form with the place and semantics of language. Interested in the intersection of notions and meanings. Her work investigates the relations and mutual entanglement of the individual in socio-cultural processes. Lives and works in Toruń and Wrocław.

back to: Exhibitions / 2017
Beware! There are sharks swimming in the pond
White lie
see also: Natalia Wiśniewska. Giantess in the Archive