The title of the exhibition refers to Fritz Lang's science fiction film “Woman in the Moon” (1929), in which the woman’s role is heavily dominated by her male companions.

While relating the fiction to reality, we find out that despite the occasional participation of women in space missions, none of them has ever actually stood on the Silver Globe. Since the 1960s, there was a view among researchers that sending women into space was not only more expensive because of the psychological, social and hygienic needs of female astronauts, but also more risky because of their physical conditions.

In this context, NASA's unveiling of plans to land the first ever woman on the moon in 2024 seems ground-breaking. All the more so because the next manned lunar flight programme is to be called Artemis, instead of Apollo, as has been so far. An interesting interpretation of the subject has been provided by Mary Daly, who maintains that Apollo was a woman-hating opponent of matriarchy. Right after his birth, he killed his greatest enemy – the female dragon, whose name Delphyne meant 'womb’. On his temple in Delphi there was the maxim: "Keep woman under rule” (M. Daly, 1978).

The substitution of Apollo for Artemis is highly symbolic, giving hope for change and making a crack in the old patriarchal order. Artemis is a type of heroine fiercely dedicated to a cause and striving to protect disenfranchised women. She knows her own worth and does not allow herself to be subordinated to social norms. The figure of Artemis was also the inspiration for the comic book character Wonder Woman, a steadfast warrior who fought against evil but also for equality.

The starting point of the exhibition's narrative is the symbolic woman on the moon: on the one hand, the extraordinarily strong Wonder Woman, transgressing bodily and psychological boundaries and achieving the impossible, but also struggling with the most difficult, potentially life-threatening mission. The journey to the moon is also a figure of an impossible journey, an experience of being in motion, moving in a way that is not always controlled, or standing still – often in spite of oneself.

The exhibition 'Woman in the Moon' juxtaposes works by two female artists: Małgorzata Szandała and Marta Szulc, who together create a kind of a two-voice story, a narrative situated between fiction and reality, humour and macabre. They also touch on current social issues and introduce an element of rebellion. The artists talk about women from the past, present and future as well as about themselves – about women who, although they have never physically stood on the Silver Globe, often come face to face with the impossible. Each of them struggles with their own space mission.

Małgorzata Szandała (born 1977) - PhD in art, works at the Academy of Fine Arts in Katowice. She explores various narrative forms created on the borderline between factual description of real events and fiction growing out of them or reflects on reality through her subjective experience. She creates site-specific installations, objects and visual essays. She’s also the author of a book titled “Schrony przeciwatomowe i słowniki” (Atomic Shelters and Dictionaries).

Marta Szulc (born 1980) - visual artist, active in the field of painting and drawing. She graduated from the European Academy of Arts in Warsaw, major in Graphic Design. She operates in the area of pop culture and post-war photography, where she finds motives that are later intertwined and copied. She comments on the present in an ambiguous way, creating a series of realistic works about, among other things, the dangers of the development of artificial intelligence, climate change or a world without civilisation. 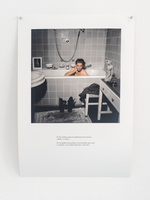 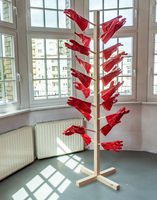