In the 1930s maritime issues in Poland were popularised by the Maritime and Colonial League that had been operating under various names from 1918. In 1939, it was one of the largest social organisations, with around one million members.

One of its objectives was "the acquisition of land for the purpose of ensuring unrestricted human and economic expansion for the Polish nation, as well as for the concentration of the Polish exile in foreign countries and maintaining its connection with the homeland" (G. Orlicz-Dreszer, 1931). The overseas colonies were seen as a miraculous remedy for the poverty of the reborn Poland, which suffered from a lack of raw materials, overpopulation in the countryside and unemployment. The League's press called for the revival of the Polish spirit of conquest, and considered colonial expansion to be a cure for historical injustice: "Only expansion will make it possible to compensate for losses, neutralise contrasts, heal wounds" (S. Pawłowski, 1939). The experience of historical subordination of Poland’s oppressed nation was supposed to sanction the revision of the previous colonial mandates, especially the post-German ones. The propaganda narrative adopted a vehement, imperative tone, treated as the voice of the entire society, which demanded the overseas territories and claimed the right to exploit foreign lands, which was seen as the “vital necessity” and historical justice. Initially, the authorities of the Second Republic treated the colonial ideas extremely dismissively. Minister Józef Beck commented on the project of Poland’s overseas expansion sarcastically: "Polish colonies begin beyond Rembertów". There were, however, attempts to realise the absurd ambitions in Angola, Liberia, Brazil and on Madagascar. The unrealistic nature of the Polish colonial policy in the international arena was revealed particularly clearly by the events of 1934. The unofficial economic agreement signed in Monrovia between the Liberian government and the Maritime and Colonial League provided for commercial cooperation and the leasing of land for plantations. Its secret clause, however, foresaw military cooperation – a modernisation of Liberian armed forces in exchange for the right to recruit a hundred thousand auxiliary army. That same year, the “Poznań” ship set off for Liberia with a pioneering trade expedition. A showcase of the Polish industry was sent to the African market: iron, nails, several dozen barrels of cement, cotton fabrics, quilts, head scarves, men's underwear, several tons of salt, soap, sugar, tinned food and 500 enamelled nightstands (P. Jaworski, 2009). There were also eight planters on board. However, the settlement action did not last very long. The League of Nations discovered Poland's colonising attempts, so in 1936 Liberia withdrew from the agreement and Polish planters were accused of smuggling firearms. With hindsight, the colonial dreams of the Second Republic illustrate the domestic resentment of the interwar period, during which “we did not know how to realistically assess our position, just as we were not able to distinguish between bold political plans and political madness” (G. Borkowska, 2007).

Łukasz Dziedzic traces the moral gaps in Polish-African relationships in the spirit of the contemporary postcolonial reflection. In his painting, he focuses on the archive traces and visual stereotypes in representing the colonial interior. A disturbing collection of images presents the potential for annihilation which, despite the zeal of the Maritime and Colonial League, took place without the involvement of the Second Polish Republic. However, racism and white supremacy were embedded in the fabric of every colonial project, a fact that requires careful analysis. Today, the "blackface" of a Polish soldier presenting uniforms for colonial troops during the parade of the Maritime and Colonial League in Toruń (1939) will be evaluated differently. Also in need of revision are such figures as Stefan Szolc-Rogoziński and his expeditions to Cameroon and Bronisław Malinowski, whose anthropological legacy has turned out to be biased and stained by discrimination. The exhibition, complemented by archival material, corresponds with a rapid process of decolonisation, affecting not only language, museum collections, literature, science and history, but also social consciousness. The second perspective, less theoretical and more universal, is based on the observation of global trends of increasing racist and xenophobic attitudes. Harmful prejudices and myths return from the dustbin of history, updating the colonial apparatus that objectifies or animalises selected groups. Modern forms of repression, however, are much more subtle, psychologically sophisticated and usually covert. The phenomenon can be described as nano-racism, "which has become the culture and the air, in its banality and ability to penetrate all the pores and veins of the social organism, in the times of widespread stupefaction, mechanical debraining and duping of the masses" (A. Mbembe, 2018). "Ad maiorem Poloniae gloriam" is a wake up call for the white section of the population – we are and always have been privileged, and racism is our responsibility.

Łukasz Dziedzic (born 1977) – audio-visual artist, musician, painter, art designer and curator. He creates videos, installations, music projects and has curated many exhibitions. Together with Joanna Rzepka-Dziedzic, he runs the Szara  Gallery in Katowice. Years later, he returns to the abandoned medium of painting, finding in this traditional technique the possibility of analysing irritating and uncomfortable subjects. 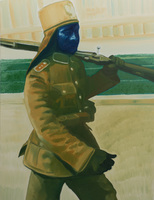 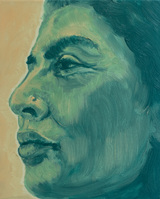 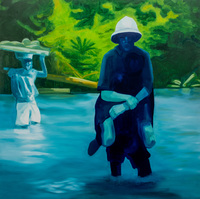