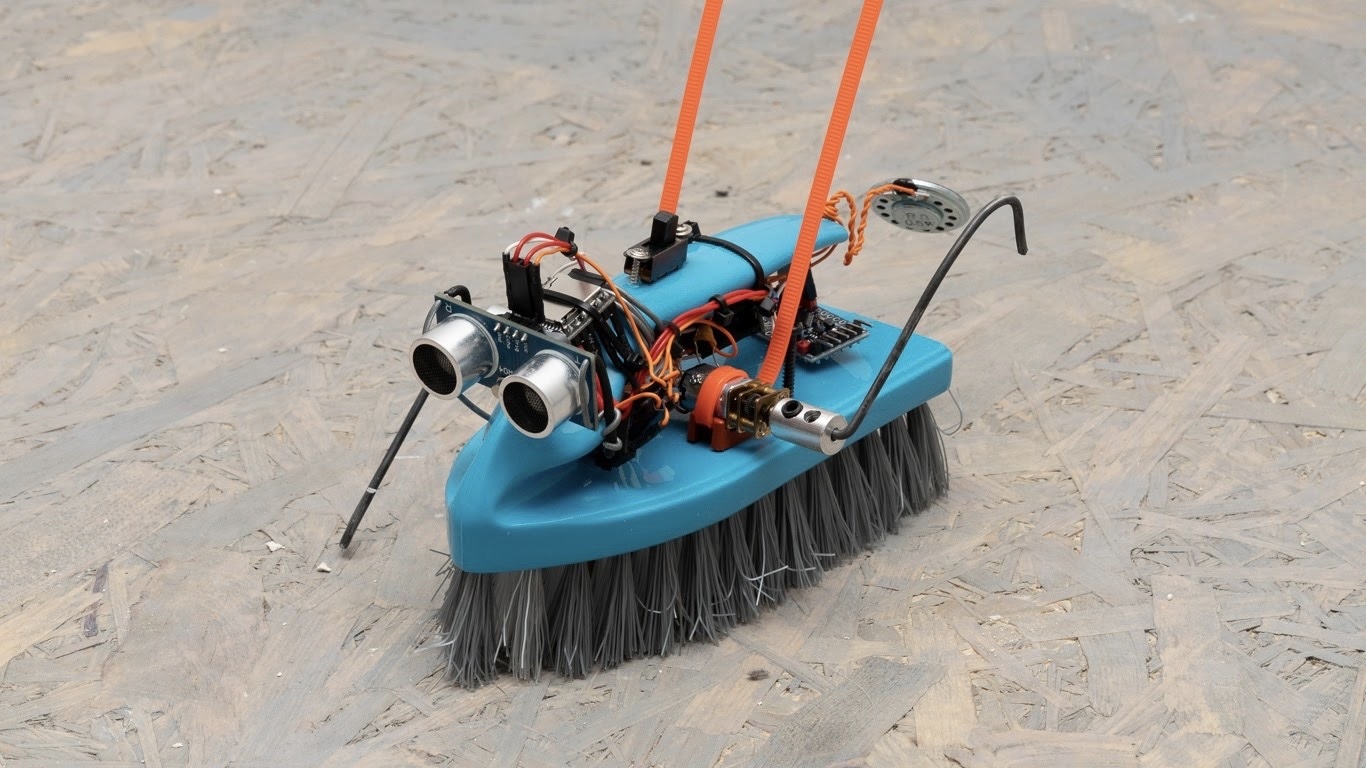 It is here, at the very beginning of the text that I need to explain myself for the whim to refer to Kierkegaard, the Danish philosopher whose life – if we are to believe the Polish Wikipedia – was not extremely eventful. Especially, if it is revived in the context of an exhibition featuring moving and barking brushes, tutorials of the so-called Russian hackers’ cracking methods and plasterboards dust – an exhibition which is closely con-nected with external events i.e. with the world which for over three months manifested itself to the fullness of its intensity.

Kacper Lecnim’s exhibition says nothing about Abraham’s journey to Mount Moriah during which the expected attractive landscapes were replaced with a trial of faith and God’s intervention, boiling down to the message “it’s very good, Abraham, that you trust the Lord – you were going to sacrifice your son. You’re a great guy and as a reward you will get as many children as there are stars in the sky”. In his introduction to Kierkegaard’s “Fear and trembling”, Jarosław Iwaszkiewicz recalls that the philosopher’s father once climbed a mountain too only to curse his fate and his two surviving sons. Nobody died then, nobody tried to kill anyone, but young Kierkegaard remembered it so well that this memory became his ob-session. Iwaszkiewicz concludes ironically – “a family of lunatics [...] it might have been so indeed”.1

For generations, the story of Abraham and Isaac ignites children’s soft imaginations – and all the patient clarifications provided by catechists sound doubtful when confronted with the horror of the realisation that a trip to the mountains with your parent may be far from idyllic. Kierkegaard says: “I am going to draw out from the story of Abraham all the dialectical consequences inherent in it and express them in the form of problemata to demonstrate what a tremendous paradox faith is, a paradox which no thought can embrace, because faith begins precisely where thinking ends”2 – this is more or less what “Fear and Trembling” is about. In the view of the Danish philosopher man is a state between a constantly fearful beast and an angel – and for Kierkegaard an angel is someone who does not fear, hence, someone who does not tremble any more or has never felt this way. As we know, this great biblical story concludes with an award for all those who stopped fearing and came to believe that there is a posthumous way of existence in the form of an angel, with all the wings and halos and never-ending va-cations in the clouds. If his hand armed with a knife does not tremble Abraham secures the vacations for himself. His hand will finally be stayed by an angel’s firm hand. The only person about to die of fear is the son, the unsacrificed sacrifice – a means to a cer-tain goal. Abraham lives to 175 years and Isaac up to 185, perhaps he might have lived longer if not for his childhood trauma. As I have already mentioned, this is not at all an exhibition about infanticide, however, what we first see trembling (with fear) is a bush greeting us at the entrance. Its name is rather not Isaac, although it could be – after all Isaac means to laugh, and I hope you still remember what it means to shake with laughter.

Over the entrance to Dante’s hell there was the aphorism: “abandon hope all ye who enter here”. According to some mean critics, there are exhibitions which should also be marked this way. Others, not as poor as the former ones, but much more pessimistic and bleaker are definitely more entitled to be given the motto. Especially the exhibitions devoted to late-capitalist existence, permeated with a lack of hope of improvement, so common in recent years of the gallery and institution life. Lecnim’s New Normality. Old Habits proposes a completely different warning: “get ready and arm yourselves with hope all ye who enter here”. This is not however a hope as easy to handle as some communications we have got used to while living the pandemic regime – the hand-made "it's gonna be okay" cards that appear here and there, written by a shop-assistant’s trembling hand. One day we will take the masks off and return to pubs, galleries, supermarkets and start playing the new normality – and finally, the spring has come, my dear. The exhibition was prepared during the spring – slightly late, just like the opening day. What originally trembled and shook, did it for other reasons than today – in other words: it trembled differently. While the burning issues at the time were the climate catastrophe, an imminent economic collapse, only heralded by the 2007-2008 events, such things as exhibition openings and the so-desired vacations were still on the horizon. Instead, something completely different happened – the COVID-19 pandemic and its consequences – with the flutter of bat wings in a soup served to an eccentric food lover at the other end of the world, which may be considered a downright catastrophe. As Konrad Wojnowski has it, catastrophes “bring confusion, unbalance, disorganise human existence, often leading to a reassessment of the accepted knowledge of the world and a change of the course of civilizational development, always signalling the end of a certain world while stimulating the birth of a new one. This is how they differ from accidents, mistakes and defects – they appear out of nowhere, bringing irreversible changes to the environment. [...] for a moment making any order dysfunctional and, consequently, absurd. Their weird appeal lies in their ability to allow us experience something unpredicted and extend our knowledge of the world. Catastrophes take man by surprise and bring him new information about his environment [...]”.3 We have experienced all that, but Wojnowski explores the concept further, speaking about the “usefulness of catastrophes” being their “[...] stimulating effect on an organic system, which in the wake of an unexpected event gains new information, favourable for its evolution. In order to benefit from the potential of a catastrophe, the system in question has to be capable of surviving a sudden shock and absolutely needs the right tools as well as, at best, the awareness, which will make it possible to trans-form losses into benefits”.4 Therefore, the hope we are arming ourselves with should never rely on the “it’ll be ok” formula but on the very conviction that it will be completely different. I do not need to convince you that the difference has already appeared, there is no need for presenting economic forecasts, employment statistics or the evidence for marching collectively towards authoritarianism. The Abraham-like unbroken faith in the continuity of economic development and the dominance of liberal democracy is an old, pre-pandemic, highly outdated faith. The benefit brought by the catastrophe may consist in reminding us that the old crystal palace – this great interior of overwhelming boredom, so criticised by Dostoyevsky and Sloterdijk – has trembled and cracked at its foundations, and each fracture has been invaded by the so much unwanted history.

Is it then a post-apocalyptic exhibition? Actually it is not. Neither did we rise from the dead, nor did Anything (a UFO or the Saviour) come to solve the dispute over the last things. The end of the world has been postponed, there is only the end of the world-we-know. The spectre that haunts Lecnim’s “New Normality. Old Habits” is the immortal spirit of self-organisation, supported on Michel de Certeau’s three pillars of tactics – the economy of the gift, the aesthetics of tricks and the ethics of persistence.5 This is a subtle post-catastrophe record – the invisible power, propelling angry brushes, barks in the rubble, and the artist shares the methods of circumventing the restrictions to the access to digital knowledge-power. The methods will certainly not be useful for demolishing the crystal palace or making bearded Abrahams’ hands tremble not because of age but the lack of faith. This is exactly what happened due to external factors. Such factors which our lives – contrary to Kierkegaard’s – are full of. What else can be used to measure life quality if anyone feels like squeezing it into the ruthless logic of a graph? Perhaps, as Lecnim wants it, one can apply non-GDP measures such as happiness indices. All those who tremble, we have nothing else to do but to arm ourselves with hope.