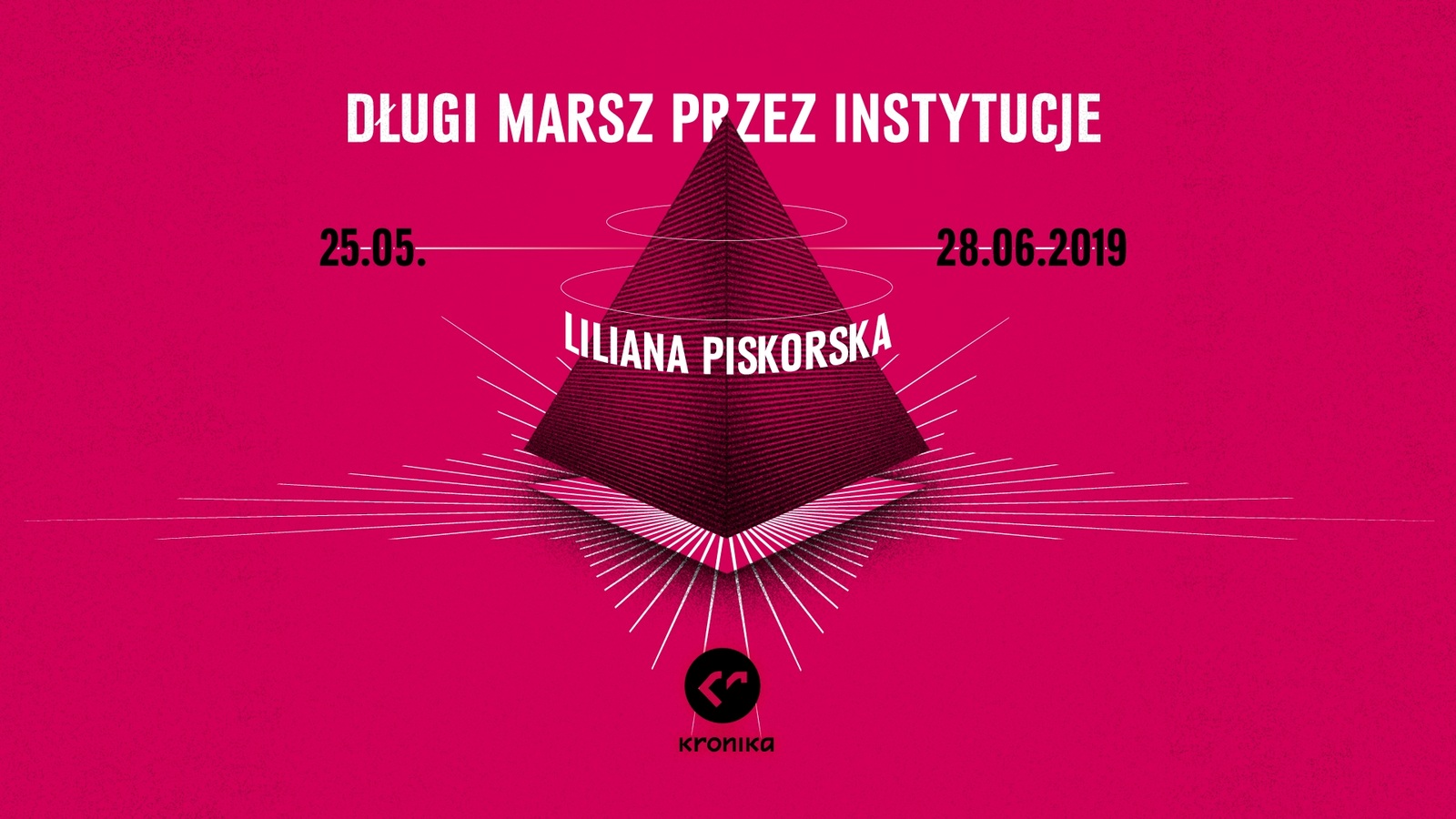 The title of Liliana Piskorska’s exhibition brings to mind the writings of Antonio Gramsci, a Marxist philosopher who believed that the scope of influence is determined not only by political authorities, but also social, cultural and religious institutions.

The long march through the institutions is a creeping revolution – gradual ideological work, education of qualified personnel and takeover of significant positions with the long-term goal of transforming the social structures of capitalist-Christian countries. Nowadays, this concept is used as a component of a political conspiracy theory which assumes that the march through the institutions has been implemented and is being enacted by European communities and the contemporary fifth column. Such actions are to bring about the breakdown of traditional social mores and Christian values, that is, an assault against the social order. The current propaganda narrative has a clear message which not only indicates who the public enemies are, i.a. sexual minorities, feminists, gender studies researchers, immigrants, activists and environmental movements, but also claims that those groups share communist and “anti-human” values – the so-called Cultural Marxism managed by mysterious, foreign capital. Thus, the establishment promotes a continuum of threats which allows for populating the public debate with straw men. Pundits treat pride parades as promotional vehicles for paedophilia, gender studies as synonymous with sexualisation of children, women’s strikes against the proposed total abortion ban as attacks against Christian identity of the nation, and feminists as ugly and aggressive butches. Liliana Piskorska takes a careful look at this rhetoric, trying to identify its historical background. As usual, there are two sides to the story and each of them has its own logic.

Liliana Piskorska juxtaposes the language of politics with magical thinking and Polish places of power which become the context for collective expression of social anxieties among women. She travels to the Ślęża Mountain, the stone circles in Odry and Poland’s most powerful earth chakra located at the Wawel Castle. In this respect, the Wawel Hill is unique – it is simultaneously the meeting point of opposing narratives and a source of not only patriotic and religious sentiments, but also occult energy. According to legends, this is the very place where God Siva dropped one of his seven stones of power, where Apollonius of Tyana left his magic talisman or ring, where a son of Krakus killed a dragon to cover up his act of fratricide, and where a rock spoke to a young King Casimir the Great. Dowsing research indicates that the most powerful energetic point in the castle is located in the St. Gerona's chapel, under the Batory courtyard, where seven of the planet's main lay lines intersect. The cosmic energy emanating from the chakras has a regenerating effect; it can be a remedy for spiritual and mental fatigue caused by propaganda or indoctrination, making it possible to let go of the minority stress and anxiety which are inseparable components of life in the contemporary world. In the face of radicalisation and social divisions, the magical outlook seems to constitute an alternative order of things. One with allows us to reach much deeper – use our pre-Christian roots to access that what is ritually common and what we have been told to forget.

Liliana Piskorska (born in 1988) is a visual artist who holds a PhD in fine arts and has graduated from the Faculty of Fine Arts of the Nicolaus Copernicus University. Since 2013, she has been a member of the Gallery by Vistula River (Grupa nad Wisłą). Her works have been shown in over 85 group and individual exhibitions in Poland and abroad and showcased by various media channels, including TVP Kultura, Arte TV, and CBS Canada. In 2017, she was the laureate of the Forecast Forum organised by the Berlin’s Haus der Kulturen der Welt. She was also one of the finalists in the Views 2019 competition (Spojrzenia 2019). She was brought up in the countryside, has been baptised and confirmed, and is an atheist and a non-heteronormative lesbian. Her actions betray a clear queer-feminist, anarcho-feminist and post-humanistic perspective, and her work is analytical, referring to the context and specificity of the socio-cultural landscape of Poland. She is unwaveringly committed to creating alternatives to the heteronormativity.
http://lilianapiskorska.com