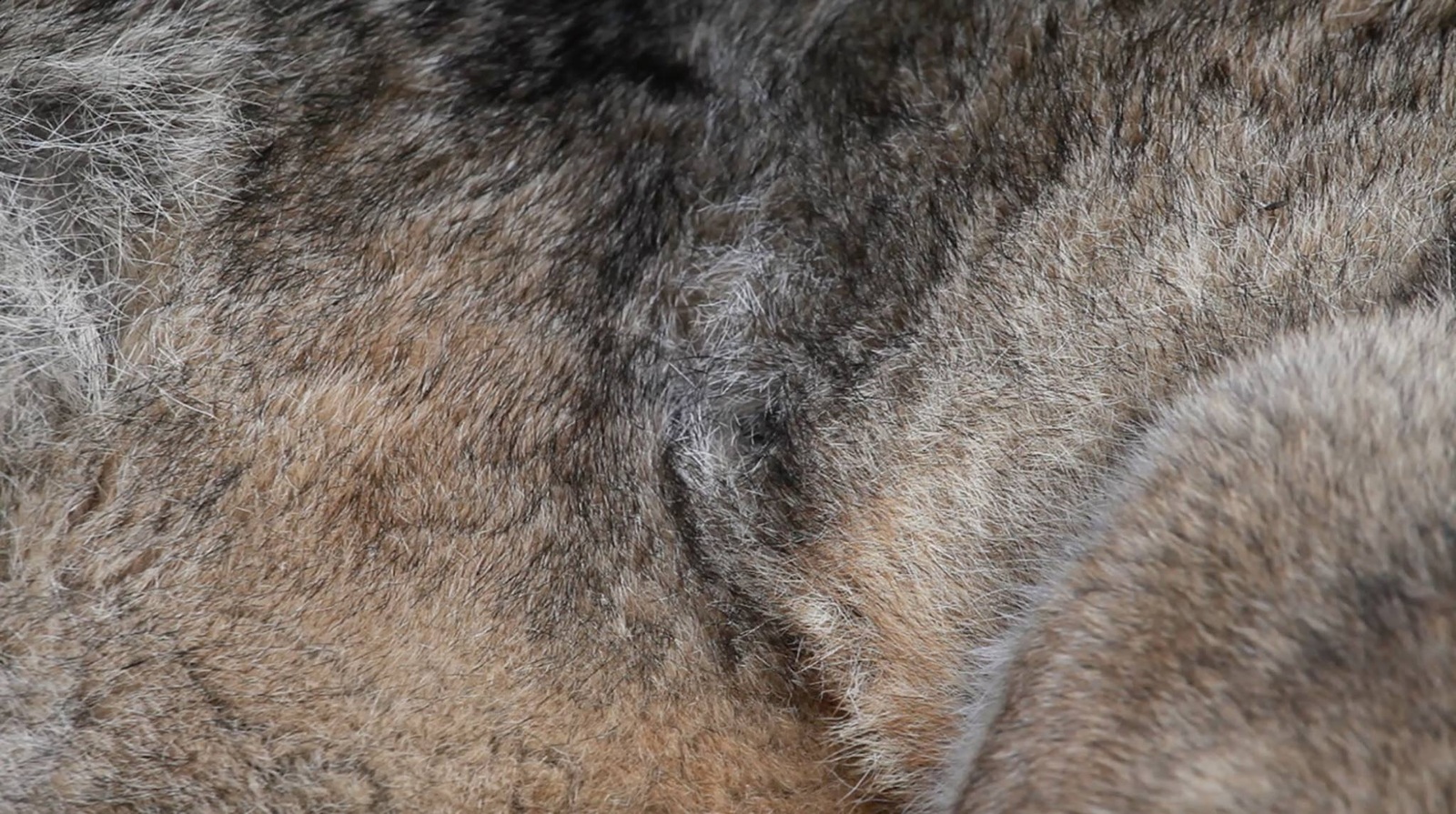 In nature, wolves live in organised social groups, they are able to create the most complex and functional hierarchical structure in the world of animals. Hierarchy is fundamental – once it is disturbed, the entire pack falls apart. Excluded wolves live outside the pack. Those are specimens that somehow caused difficulties to the group: they did not want or could not subordinate. Living in isolation, they refrain from scent marking for fear of conflicts; they also often resign from howling. Solitary wolves wander intensely in search of areas that are not yet occupied, where they can live, as well as in search of other specimens, in search of proximity.

Luna – the protagonist and, at the same time, the co-creator of Natalia Bażowska’s work – is a she-wolf separated from her pack and living on the premises of the Wolf Park in Stobnica, a centre that pursues efforts towards preservation of rare and endangered Polish animal species. The wolves that reside there become socialised into contact with people to a certain extent, which makes them more trustful, they lose their wildness and caution towards humans – the species that nearly led to the annihilation of wolves in the past. Yet, both species are akin in psychological terms: they live in groups, establish families on a planned basis, have an alpha specimen, undertake group expeditions and demonstrate xenophobic attitude to strangers.
“While being with her and observing her behaviour, I arrived at the conclusion that our situation was very similar. Gnawing, sniffing, sleeping with me, Luna gives me access to a very private sphere of her behaviour. The sense of intimacy is closer from self-preservation instinct.” Bażowska’s work demonstrates a sequence of stages of developing an understanding between two species: from distanced observation, to acceptance, to physical contact.

Drawing attention to the obvious human egoism, which makes us forget about the extent of our dependence on the world of nature, the exhibition Luna opens up a space of communication between species, provoking an encounter with a wild Other.
In the anthropocentric world, too much importance is attached to verbal communication, and the symbol becomes contrasted with the animal gesture, a situation that creates a gulf in contacts between the world of humans and animals. Interactionist research reveal that communication between both species can be pursued on the basis of kinesthetic empathy – by observing movements and gestures made by animals, humans try to understand their intentions and the meaning of what they do; by observing movements made by humans, animals try to understand their intentions. The hitherto disregarded role of non-verbal channels is more and more often highlighted, the diversification of languages and forms of communication is made prominent, and an entire spectrum of species is taken into account with their distinctive behavioural, affective, cognitive features and patterns, social organisation, etc. The current research in the field of animal studies offers the possibility to break with the paternalistic approach to animals that has prevailed so far.
Careful observation and sensual contact with an animal allows us to discover the way in which it perceives reality and its own body. As the artist comments on the project: “The presence and physical proximity, the bodily experience of the world is an equivalent of the linguistic manner of communication and forming mutual relations. The body is a common denominator for everything that is alive. Although it can have different sensitivity, plasticity or changeability, it provides the possibility to transgress, make flexible and re-establish the borders between the worlds of different species. Understanding between species can take place through physical contact, gestures and gazes, releasing scents or observation of the body of the ‘interlocutor.’ The body has the potential to convey information, and therefore it can also provide a way to establish proximity, build mutual emotional acceptance and develop a bond. The most important thing for both sides is to learn to interpret this language correctly.”

Natalia Bażowska (b. 1980) – visual artist, painter. Graduate of the Medical University of Silesia – SUM (2005) and the Academy of Fine Arts in Katowice (2012, with distinction). In 2010, Bażowska received her PhD degree from the Department and Clinic of Psychiatry at the SUM for her thesis titled Evaluation of emotions triggered by visual content with people suffering from depression. Interested in the human being, their psyche and physiology. At the same time, Bażowska’s observations of animals in their natural habitat, combined with her medical expertise, allow her to locate the similarities between the world of people and animals.

back to: Exhibitions / 2015
Bartosz Zaskórski. And the Dudes are Wallflowers
Oneiron & Yan Tomaszewski. Scripture
see also: Natalia Bażowska. Luna in the Archive